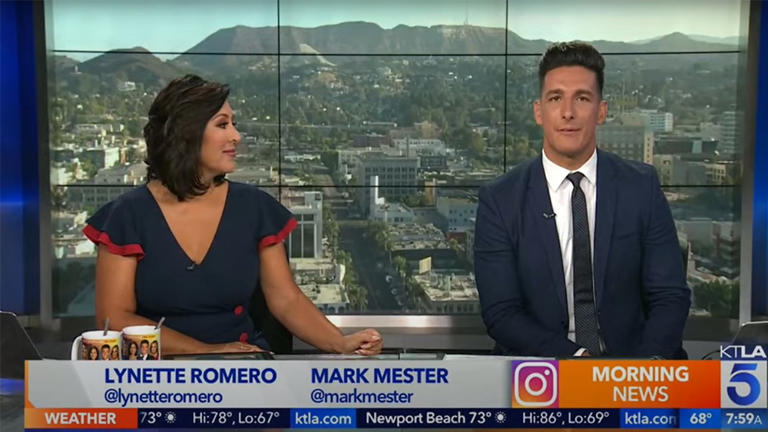 The tumult continued today at L.A.’s Nexstar-owned KTLA-TV as the outlet’s Weekend Morning News anchor Mark Mester was suspended, Deadline has confirmed.
Mester’s suspension comes less than a week after it was abruptly announced that his co-anchor, Lynette Romero, was leaving the station.
More from Deadline
On Wednesday, the station’s longtime entertainment specialist Sam Rubin went on air with what he termed “some news that we’ve just been handed here that we wanted to share with you first.”
Rubin said in the message that Romero had “decided to move on after nearly 24 years at KTLA.”
He went on to say that management “worked hard” to get her to stay, but she chose to depart.

After nearly 24 years at KTLA, our Lynette Romero has decided to move on and pursue another opportunity. We wish Lynette nothing but the best of luck on her next chapter. pic.twitter.com/dnjrhCItSs

While none of the parties involved seem to be disputing that Romero wanted to leave — including Romero herself — fans and the station’s faithful took to Twitter to lament her sudden exit. They were not alone in their disappointment.


On Saturday, Romero’s co-anchor Mester went on air and, seemingly of his own accord, offered what he called “an apology” to viewers: “What the viewers experienced was rude, it was cruel, it was inappropriate, and we are so sorry.”
Mester went on to explain that what bothered him was the fact that Romero’s departure was announced so suddenly and that she did not get time to say goodbye to viewers. He called the announcement “unfortunate” and “inappropriate” and again apologized.
“I also want to say sorry to Lynette Romero,” he continued, “because, Lynette, I love you so much. You really are my best friend. You did not deserve what happened to you on Wednesday.”
Apparently, Mester’s commentary did not sit well with station management, because he now has been suspended. There is no indication for how long or how it will impact the station’s Weekend Morning News.
Deadline reached out to KTLA and will add any comment received.
Longtime KTLA reporter Dayna Devon announced departure from Weekend Morning News in last month.
LOW CLASS OPERATIONon September 19, 2022 5:13 pm
WTF! Don’t expect people to “welcome people into their homes” and then have the networks/corporations treat their people like dirt.

@KTLA @NXSTMediaGroup Granted I’m just a viewer and don’t know the whole ins and outs of what happened but the way the amazing @LynetteRomero was seemingly dismissed today without giving her a proper goodbye opportunity is a BAD look. pic.twitter.com/fi88yBUD3t